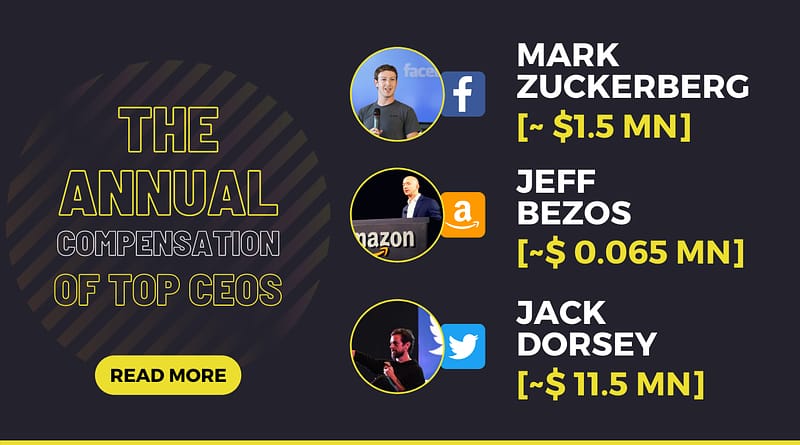 We’ve seen a wide range of CEO salaries at venture-backed companies, from as low as $35k annually to as much as $325k (plus bonus).

While there is no dataset explicitly outlining CEO salary levels at early-stage companies, we can use the salaries from tech companies at their IPO to get a sense for what the salary should be for a successfully exiting CEO. The data below shows the salaries of 101 tech company CEOs at IPO.

Now we will be walking through the salaries of various industry expert CEOs as the data was collected & shared originally by CrunchBase.

Some of the Best CEOs Take the Lowest Salaries

For instance, Marc Benioff of Salesforce took a salary of $1 at IPO, Patrick Shiong of Nant Health took no salary, Jack Dorsey at Square took only $3,750, and Jeff Bezos at Amazon took only $64,333. That said, these individuals were independently wealthy before the IPO, but it’s always refreshing to see a CEO pass up a big salary if he/she doesn’t need one.

It sets an example for the rest of the company, establishes a culture of cash efficiency/frugality, and shows a founder putting the company ahead of himself/herself.

Founders taking low salaries also show very well when going to raise money. VC would much rather back a scrappy, frugal founder than one that spends gratuitously and the CEO salary tells you a lot about the CEO’s mantra.

Keep it as low as possible, expect option grants and bonuses for success, and keep in mind the real source of value is your equity: Benioff, Shiong, Dorsey, and Bezos owned 32%, 57%, 24%, and 48% of their respective companies at the time they went public.

It goes without saying they made a lot more money on their equity than they did on salaries.