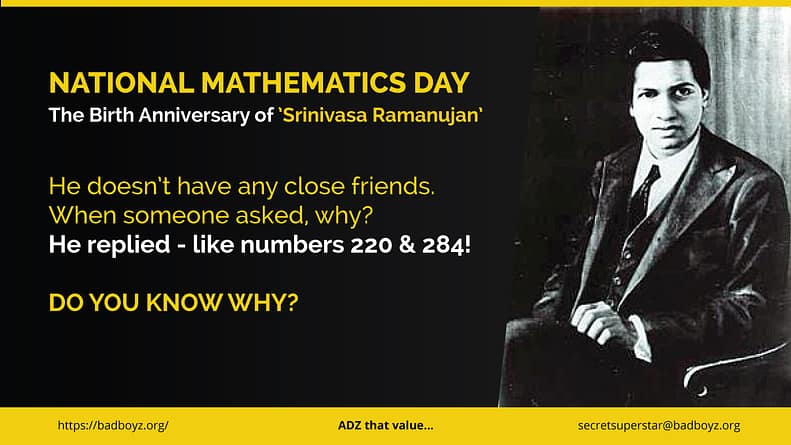 It is on the occasion of the birth anniversary of Mathematics genius, Srinivasa Ramanujan.

A Brief of How It Started:

In India, the day ‘December 22 has been declared as the National Mathematics Day. The Declaration was made by Dr. Manmohan Singh, Ex-Prime Minister of India, during the inaugural ceremony of the celebrations to mark the 125th birth anniversary of Srinivasa Ramanujan held at the Madras University Centenary Auditorium on 26 February 2012. Dr. Manmohan Singh also announced that the year 2012 CE would be celebrated as the National Mathematics Year.

Mathematician Ramanujam didn’t have any close friends- someone asked him the reason.
He replied that although he wanted to have close friends -nobody was up to his expectations.
When pressed how he expected his friend to be – he replied – like numbers 220 and 284!

The person got confused and asked what is the connection between friendship and these numbers!
Ramanujam asked him to find the divisors of each number!
With much difficulty – the person derived and listed them

Ramanujam then asked the person to exclude the numbers 220 and 284 and asked the sum of the remaining divisors
The person was astonished to find:

“an ideal friendship should be like these numbers- to complement each other – even when one is absent – the other should represent the friend!”

The person thought – no wonder this genius is on the world’s top list of mathematicians!!

What do you think?