At Forbes India, our team deals with success stories on a daily basis. We find ourselves in the same room with game changers and some of the richest and most successful businesspeople multiple times a year. Is it awe-inspiring? Definitely. But if there’s a time when we are truly awestruck, it is when we are working to discover the next class of Forbes India 30 Under 30. We go through hundreds of nominations, and every now and then, you will hear someone in the newsroom exclaim, “What have we achieved so far?!”

The class of 2020 for Forbes India 30 Under 30 is no different. These sub-30 somethings have all created something formidable with limited exposure and resources with only one goal in mind: To stand out from the crowd.

This year, we have 17 categories, including a new one—Digital Content Creators—to keep up with the trend of social media creators and influencers. YouTuber Bhuvan Bam graduated from ‘Watch Out For’ to debut in this category, along with Gaurav Chaudhary, better known as Technical Guruji, who has 15 million subscribers on YouTube. 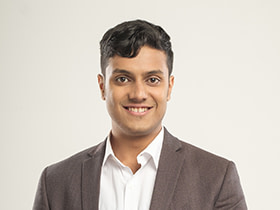 Leverage Edu, a platform focussed on career counselling and university admission, has catered to about 10,000 students and is on course to clock Rs 10 crore in revenue in FY20.
More Details

Squadcast is a SaaS company that ensures that the IT systems of its customers are running seamlessly, fixing everything from simple glitches to complete breakdowns.
More Details

Rapido's motorcycle taxis, now available in 100 cities across the country, have made the company one of the most sought-after startups in India.
More Details

Deepak Punia became the first Indian in 18 years to win a Junior World Championship, and will represent India at the 2020 Tokyo Olympics.
More Details

29-year-old Eshan Sadasivan's company is the maker of the lightweight Deskit bag, which has a foldable study table attached for rural students.
More Details

You know him as Technical Guruji, his YouTube channel where he breaks down all things tech—not just as reviews but also how the tech works—for his 15 million subscribers.
More Details

Gegadyne Energy has developed a proprietary non-lithium battery technology that can charge a car battery from 0 to 100 percent in under 15 minutes.
More Details

Shah is focused on propagating the versatility and global appeal of Indian heritage weaves, and with Ekaya, supports more than 8,000 weavers.
More Details

Bullied for being overweight as a child, Prakash set up HealthSetGo to provide health programmes in schools and is now focused on policy advocacy too.
More Details

The tech platform connects car-owners to quick, affordable and quality servicing, and raised Rs35 crore in a Series-A round in 2019.
More Details

Sai Pallavi did her first film when she was in Class 6 to miss math class. Today, after playing some memorable characters in Tamil, Malayalam and Telugu films, she wants to experiment with 'better roles' and 'chiselled characters'.
More Details

BharatAgri's algorithm tells farmers what to grow, when, and how to grow it to maximise production and farmer income.
More Details

The 28-year-old artist has developed a practice that deals with history and historical images that chronicle events of conflict and violence, and how it shapes the society's perception of them.
More Details

He has won two golds at the Asian Games, a world record in 10m air pistol, and a ticket to the 2020 Tokyo Olympics.
More Details

The youngest sales leader at the beer company, Bakrewala helped Bira and Boom expand to five geographical clusters in a year.
More Details

The research process was three-fold: One, interviews by the Forbes India team with sources across relevant categories as well as through studies of databases and media coverage. Two, on forbesindia.com, inviting applications from, or nominations of, entrepreneurs and professionals who fit the criteria. Three, spreading the word on social media.

This helped us arrive at a longlist of over 255 names across 17 categories. The next step was narrowing down to a ‘shorter longlist’—the names most likely to make it to the top 30. This pool of about 85 names was decided in consultation with experts in each category. The last stage was finalising the 30 winners for 2020. Armed with expert views, the Forbes India editorial team debated, argued and vetoed its way down to the final 30. We realised there were some others who deserved to be featured under ‘Watch out for’.

We have only considered for selection those who were under the age of 30 as of December 31, 2019 (the cut-off date for selection of the list). Thus, in the case of enterprises which have several co-founders, we have considered only those where at least one of them is under 30.

(In the case of entrepreneurial firms where there are several co-founders, Forbes India considers these to be a singular entity.)

How to get the RIGHT traffic to your website using Customer Awareness Levels?

Are you using Google ads? Don’t waste your money here.